Lascaux 1 = original cave, discovered in 1940, closed in 1963. Over 600 parietal wall paintings of large animals, the paintings are estimated around 17,000 years BP. Lascaux 2 = copy of the Lascaux cave opened for public in 1983, Lascaux 3 = tour « Lascaux, the International Exhibition » since 2012, Lascaux 4 = Lascaux International Center with a copy of Lascaux cave opened for public in 2016. 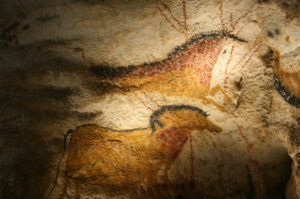 I never visited Lascaux 2 so I can not make a comparison. Lascaux 2 is still open to the public but it now has only French speaking tours. Lascaux 2 tour costs 13 €, Lascaux 4 tour costs 16 €. If you plan to spend all day in Montignac, it is worth considering buying a joint ticket for Lascaux 4+Parc du Thot for 20€. Make sure you book your visit at least 1 day in advance. The center is open 365 days a year, bravo! 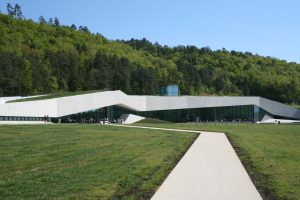 The building itself is very modern with lots of concrete and it needs time for the new plants to grow and cheer it up a bit.

We visited in April 2017. Our guide was professional, kind and his English was comprehensible. I would prefer the bigger time space between groups as we could hear both groups before and after us. The tablet and headphones are not working if you are too far from the guide. The cave is very detailed and well made so you nearly forget that it is „only“ a replica. The paintings themselves are amazing. 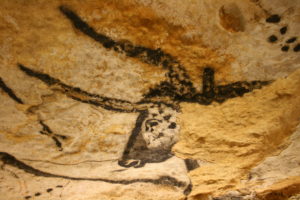 After the cave tour you then you go through the big room where you can take photos of the parts of paintings. The tablet is activated when you get close to each painting and it gives you more interesting information.

3D films are in French, headsets should activate and translate in English, but mine and several others did not work. There are other interesting workshops, especially for kids. 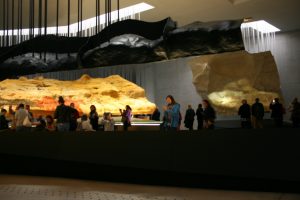 I would like to visit again in few years time, hoping that they will have changed/improved the contents of the 3D films, including the one at the beginning of the tour.

So it is definitely worth the visit. You need to book in advance to get the English tour . You cannot book on-line for a visit on the same day. The guided tour is only 45 minutes but the whole visit takes at least 2 hours – I recommend comfortable shoes. Make sure that your tablet works correctly and that it is set on the language of your choice before you start the visit.